All Departure dates and cost for upcoming season,Please feel free to email us info@himalayanrstexpeditions.com

The Himalayan R.S.T Expedition is an independent Adventure Company operated by Sharada Dhakal, a lady who is in this industry since last 2 decades. Himalayan RST founder Sharada Dhakal is renowned in the Nepalese adventure travel industry for her logistical expertise and professional organization.
Himalayan R.S.T. Expedition offer a wide variety of trekking, climbing, rafting, kayaking and tours and travels throughout the remotest corners of Nepal. Along with highly experienced local trip leaders, the company is comprised of friendly professionals who are trained to look after your entire travel requirements. Be this your first trip to Nepal, or your tenth you can count on the Himalayan R.S.T. team to take care of your needs from the moment you land until your departure. 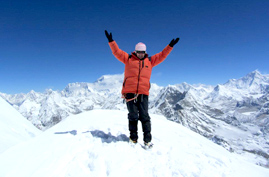 Mera Peak (6,676 m) is the highest permitted trekking peak in Nepal. Mera Peak, in the heart of the Everest region, is ideal for those looking to join their first Himalayan Climbing expeditions. Thought Technically and easy climb it is a real challenge to reach the Summit of Nepal’s Highest Trekking Peak. It stands to the south of Everest and dominates the watershed between the heavily wooded valleys of the Hinku and H. Drangkas. J.O.M. Roberts and Sen Tenzing made the first successful ascent of Mera Peak on 20 May 1953. 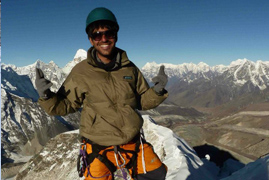 Island Peak 6,160 meters was first ascended in by a British expedition that included Tenzing Norgay. Eric Shipton's named the peak as it resembled an island in a sea of ice. The peak is part of the south ridge of Lhotse and linked to the semicircle of cliffs that rise to the north of the summit of Nuptse. Our adventure begins with a short flight to Lukla and two days of easy walking to Namche bazaar. En- route to Base Camp our trail takes us into the high valleys of the Khumbu region, providing magnificent views of Everest and the satellite peaks.


Lobuje is recognized as a trekking peak, whereas the West is known as an Expedition Peak. Aurence Nielson and Ang Gyalzen Sherpa made the first recorded ascent to Lobuje East on 25 April 1984.The East face rises over the moraine of Khumbu Glacier to a spectacular skyline, forming the south ridge. It is suitable for the complete novice or as a great refresher for those who want to climb again. The course includes an introduction to equipment, crevasse rescue, ice climbing skills, rope work.


Annapurna Region is situated western part of Nepal offer the most popular Route for Trekking adventures. For this Region both entry and out points is pokhara, which is second largest city of Nepal. Pokhara is situated 200km from kathmandu and which is very fomous for beautiful lakes with panoramic views of Annapurna ranges.The routes covers some of the most beautiful villages and offer some of the finest mountain views in Nepal. You will find different ethnic groups and cultural diversity in this region.The Annapurna region is geographically and culturally diverse and has been declared a conservation area.


Treks in the Everest Region takes you to the foot of the worlds highest mountain traveling through through villages, rivers and forests of rhododendron and pine right up to the snowline. These treks afford the closest and most spectral views of the views of the Himalaya including Mt. Everest. The Everest area is situated in eastern Nepal, protected by the Sagarmatha National Park. The park is largely composed of the rugged terrain and gorges of the high Himalayas. Altitude ranges from 2845 meters above sea level (9,330ft) to the top of the world, Mt. Everest at 8848 meters (29,028ft). 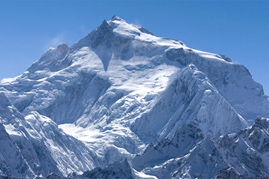 The Langtang Region Trekking lies in the north of the Kathmandu city. The Langtang valley runs west to east below the southern flanks and glaciers of langtang lirung(7245m), which separates this high alpine valley from the Tibetan plateau to the north. Sherpa farmers inhabit this and the Helambu area lying to the south beyond and below the sacred lakes of Gosainkunda.Easily accessible from Kathmandu we consider the treks in this area to be amongst the most underrated in Nepal.marvelous autumn trekking with fine mountain views,and one f the bets areas for spring flowers and bird-life.

We are associated with: